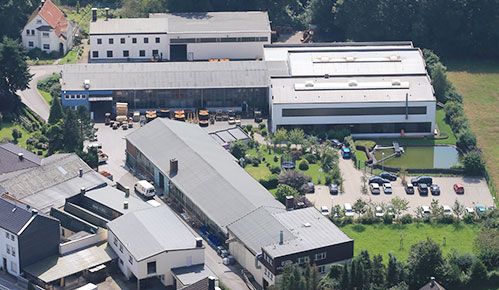 June 1919 – barely six months had passed since the end of World War I and the world had not yet recovered from this catastrophe. Despite or maybe because of this difficult existential situation, the two cousins Carl and Albert Heiderich founded a small factory and went into business for themselves.

In a space measuring 30 m², they started with the production of small metal articles that were sold in the neighbourhood. It was difficult to begin with and they only managed to survive the first years thanks to tireless efforts and the help of the entire family. Alongside sliding door pulleys, the product range initially consisted of bicycle racks, stem handles, clothes hooks, soap beakers and similar items but, after only a few years, the range was streamlined and, from then on, only pulleys and hemp rope blocks were produced. This laid the foundation for the company´s later sustained success: The production of components for materials-handling technology represented the future.

An important step for the company was the incorporation of steel rope sheaves in a welded design that took place at the end of the 1960s. Together with blocks of various kinds, they are now the main products of our company .